The Story of Stanley Mission

The GMCTL, Rose Roberts and Stryker Calvez, travelled to Stanley Mission during the annual River Gathering in July of 2018. Families in the surrounding area of Stanley Mission have been gathering at the historic Holy Trinity church grounds since the church was built. The River Gathering has become an organized summer event for the past several years, incorporating traditional activities with events such as a gospel jamboree and a concert with a well-known performer. This profile of Stanley Mission was developed through kīyokīwin with the following Elders and Community Leaders: 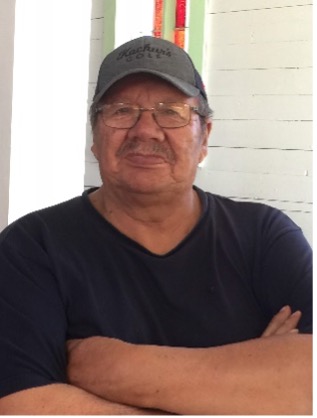 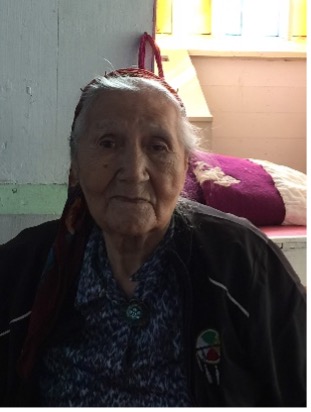 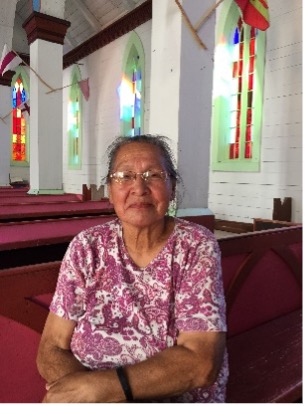 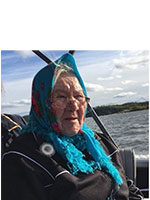 These conversations were held in whichever language the interviewee was most comfortable, Cree or English. We offer their stories as they were gifted to us for you to learn about and better understand the people and place of Stanley Mission. We hope that hearing the stories in Cree, with translations provided by Rose Roberts, that you are able to get a sense of why this community is loved by its people. In addition to these personal stories we offer a more Western description of the Stanley Mission Story developed by the Indigenous Voices team.

(If there are any errors or misrepresentation, we are wholly responsible.
Please contact us and we will make any corrections.)

The Story of Stanley Mission

Stanley Mission is a Woodland Cree community built on the shores of the Churchill River in northern Saskatchewan. The population has grown exponentially, similar to many Indigenous communities in Canada, from the 150 that were enumerated at the signing of the Treaty 6 Adhesion in 1889, to present day’s estimation of 2000.

The history of Stanley Mission is strongly linked to the church. Prior to the church being built on the point of land where it still stands today, the location was not a natural gathering place. Families gathered where the fishing was plentiful. The people lived off the land, as Elder Joe Roberts says, “They were nomads, going up and down the river. Cuz that’s what our people did back in the early 1900s, 1800s…they didn’t have a community, they just moved from one to another, summer spot here, spring spot there, winter spot there.” 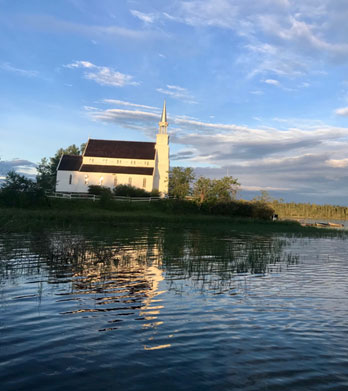 Reverend Robert Hunt had arrived in Canada in 1849 and spent the first winter in the Red River area learning the Cree language, he and his wife arrived at the Montreal River mission[1] in thesummer of 1850. (Amachewespinawin Cree Nation, 2010) Reverend Hunt wanted a more central location, so the mission was moved to its current one. The building of Holy Trinity Anglican Church began in 1854 and was completed in 1860. 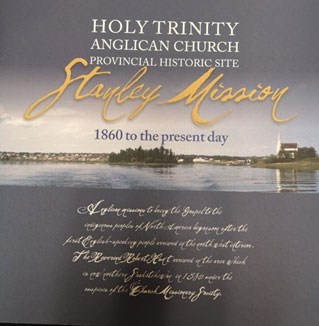 The history of the church is documented in a commemorative publication as part of the 150 year celebration in 2010. The church is the oldest building in Saskatchewan and the oldest wood frame church west of the Red River; it was declared a National Historic site of Canada in 1970. It is also a provincially registered historic site as designated by the government of Saskatchewan on August 26, 1981. (Parks Canada)

What makes the church unique is that the head carpenter was Indigenous and came from Cumberland House.[2] According to oral history, he had informed others that he was well known everywhere for building churches. Written documentation states the head carpenter’s name was Charles Fox, oral history states his name was Charles Cook. While this may seem like a significant discrepancy in the Euro-western worldview where surnames are important measures of identity; within Indigenous worldview the surname is inconsequential, your first name, relationship to others and where you originated from are more important. Surnames for First Nations peoples were created at the time of treaty signing and creation of reserves, in order to document and differentiate individuals and their families.

Indigenous peoples use the local resources to meet all their needs; building the church was no different. The timber to build the church was cut locally. The windows and hinges were shipped from England, but the shipment was lost when the York boat flipped over in rapids on the Montreal River. Reverend Hunt then dismantled his iron bed frame and made nails from the iron. It would be 2 years before the replacement windows and hinges would arrive from England. According to oral history, there wasn’t a consistent labour force, families would stop by and help out and then they would travel to their traplines for the winter. The Holy Trinity Anglican Church was completed in 1856 and held its first service on June 10, 1856.

After the completion of the church, Stanley Mission began to grow as a permanent community. There are historical pictures that show the evolvement from tents/tipis to log cabins. The community of Kayasiwaskahikan (Old Fort) relocated to the Mission. A school was established, although student attendance was not consistent as even those who built cabins at the Mission continued with the trapping tradition. Families returned to the community for significant religious events such as Christmas and Easter, they also gathered for the annual treaty payments.

By the 1920’s Stanley Mission was a successful community based on updated traditional lifestyles. It was during this time that changes in the Indian Act made it mandatory for all Treaty children in Canada to attend residential schools. As a result, the children of Stanley Mission were forced to attend the All Saints Residential School in La Ronge. This meant that at the start of every fall the families would return to Stanley Mission to gather to send their children down river in the large York boats. Most of the children attended the residential school from the ages 10 to 16. This late start provided families and the community the opportunity to ground the children in their Cree worldview. Therefore, the language and cultural losses suffered by many other Indigenous Peoples in Canada were not as prominent experiences in Stanley Mission and other northern Saskatchewan communities.

Another significant imposition that solidified Stanley Mission as a permanent community was the Northern Resources Transfer Act, 1930. The federal governance of imposing established traditional traplines and specific trapping seasons meant that people had little reason to stay out on the land on a year-round basis. Furthermore, the establishment of the Hudson’s Bay Trading Store and its competitor Revillon Freres contributed to the Woodland Cree settling into this community. With these changes in the families began to build log homes and many people chose to settle on the other side of the river, away from the church, where the HBC had established their post. By the time Indian Affairs finally began to assist with housing, 1970’s, the original mission site had been abandoned for the current location of Stanley Mission was. In 1977, the late Councillor Rhoda Hardlotte recognized the historical significance of the church and the band administration actively began to care for it. 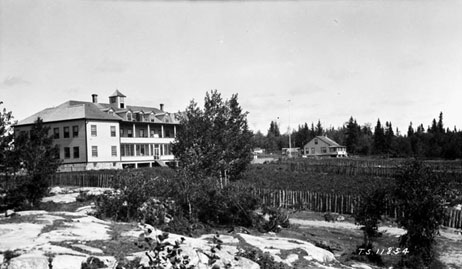 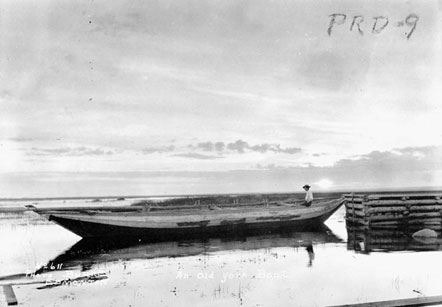 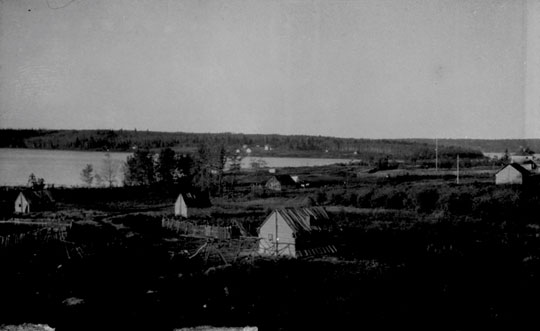 The Importance of Names

Reverend Hunt’s wife came from a community in England that was close to a park called Stanley Park, the location of the mission reminded her of her home so it was named Stanley Mission. As the people began to move across the river, that location was and is called Stanley, perhaps to differentiate from the mission location, although this is more of a local distinction, or perhaps it is simply a shortened form of Stanley Mission.

As previously mentioned, Stanley Mission was not a natural gathering place so there is no Cree name for it. Elder Joe P Roberts states “a lot of them resided at Old Fort, (kayas-i-waskahikanik). That’s why when they moved here, this place was called Waskahikanik (House) and that place was Kayas-i-waskahikan (Old House). The original name of this place is Waskahikanik, it’s not Stanley Mission, it’s not Amachewispimawin. Amachewispimawin only refers to the cliff.”

Stanley Mission and other Woodland Cree reserves are located in Treaty 10 territory, however the Woodland Cree signed with Treaty 6 on February 11, 1898, at a site close to the former community of Molonosa on the northern shores of Montreal Lake, known as a Treaty 6 Adhesion. The 2 Chiefs who signed were James Roberts for Lac La Ronge Band and William Charles for the Montreal Lake Band.

In the summer of 1898, people of Stanley Mission, represented by Nehemiah Charles traveled to La Ronge to see the Indian Agent and asked to be included in the treaty. Stanley Mission was amalgamated with La Ronge because “an Indian Agent was too damn lazy, he didn’t want to paddle over here to deal with separate ones so he wrote Indian Affairs and said ‘look I don’t feel like traveling over there, put the two of them together,” (Elder Joe Roberts). 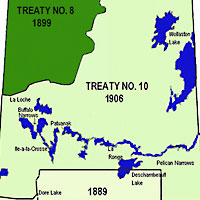 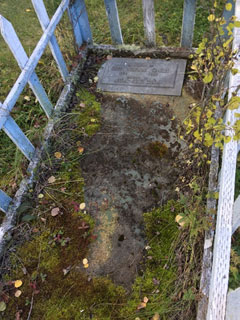 Stanley Mission continues to grow, with its current population in the 2000s. Federally operated schools have been part of the community since the early 70s; the Lac La Ronge Band took over its school administration in 1982, the first Band in Canada to do so and since then students can go from K-12 without leaving the community. Stanley Mission remains with the Lac La Ronge Indian Band.

Elder Joe Roberts had this to say regarding the future: “So like I say, I’ve been lucky to be able to watch the growth of Stanley Mission, from the time I was a kid to now. When I was a kid, people went to the trapline, either by canoe or dog team, and then into the 70s when they had ski-doos started coming in, and then the airplane took over and they all fly out to the trapline. Now we got roads all over the place, trucks and whatnot. Like where it used to take us a week to get to our trapline, now it only takes us 3 hours to drive up. And the older I get the less I like that future. I think it was more enjoyable back in the 60s and 70s. Now I worry about everything under the sun.” Elder Joe Roberts did not elaborate what it was about the future that scared him.

Other interviewees expressed thoughts mainly regarding the church, which continues to be a hallmark of the community. Annual community gatherings that happen by the church grounds have become commonplace. There are still occasional weddings across the river, and the graveyard continues to be where community members that have passed on are buried. Elder Joe Roberts has passed on his caretaker duties to James McKenzie. The continuation of traditions, old and new, and an entrepreneurial spirit are what make Stanley Mission a place many call home.

[1] At the mouth of the Montreal River as it empties into Lac La Ronge. The original mission location was on the south side of Kenderdine Island, near where the community of Old Fort was located on the northeast side of Lac La Ronge.

[2] Cumberland House, established in 1774, is the oldest community in Saskatchewan, it was Hudson’s Bay Company’s first inland trading post.

There are more updates to come for this page including audio interviews and stories with the Elders, videos and Cree word pronunciations.

Check back to see and hear these important items that will be added to the story of this community.

Facing History and Ourselves. (2021). Stolen Lives: The Indigenous Peoples of Canada and the Indian Residential Schools. https://www.facinghistory.org/stolen-lives-indigenous-peoples-canada-and-indian-residential-schools/historical-background/until-there-not-single-indian-canada