Comprehensive land claims is how the federal government has been dealing with lands and territories not dealt with through treaties, thus they are being called ‘modern day treaties’. The negotiations are between the Indigenous group, the federal government and in many cases the provincial or territorial governments. Legal concepts of land title, Aboriginal rights (as defined in the Canadian Constitution) and treaties are the backbone of the negotiations. Provisions of land agreements usually include land ownership and management, self government, and revenue sharing from resource development.(1)

The following map shows the locations of Comprehensive Land Claims in Canada. 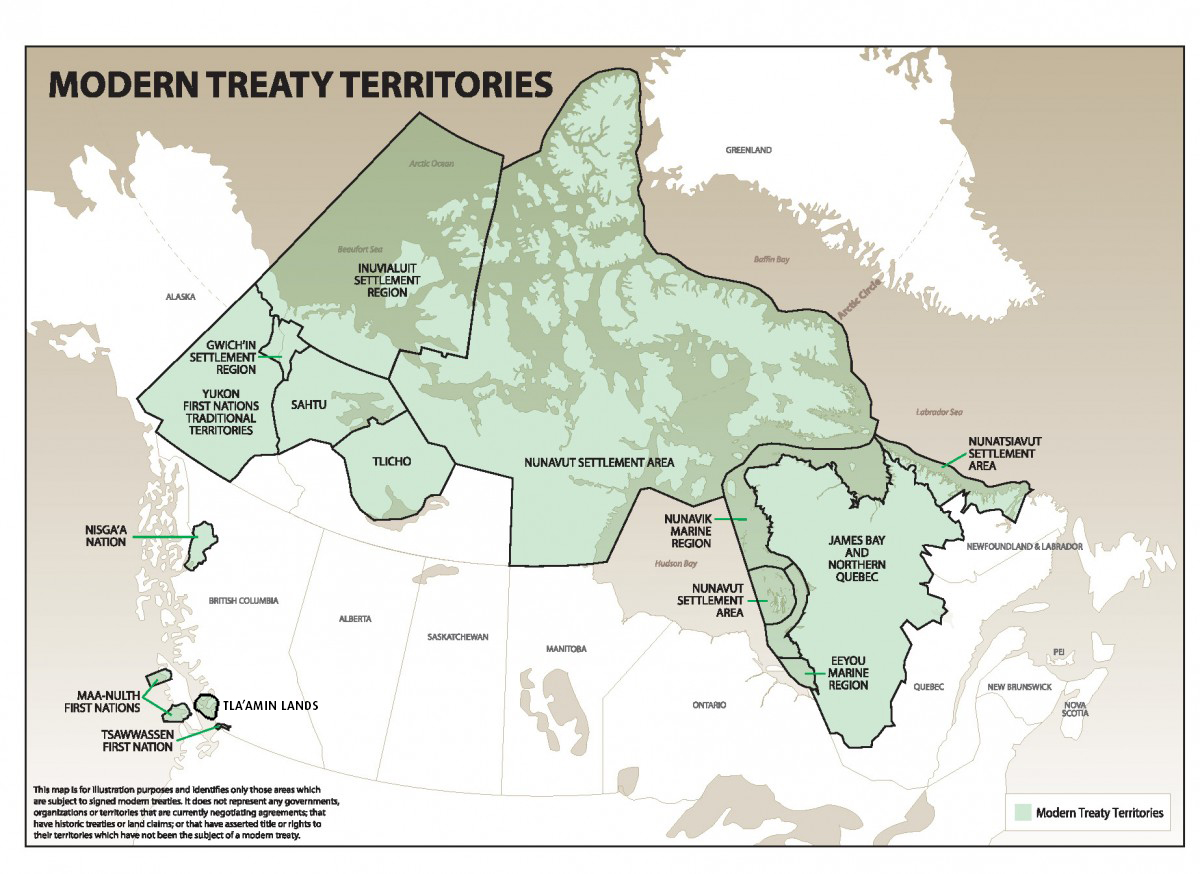 The negotiations for the creation of Nunavut, Canada’s third Territory began in 1976. An agreement in principle was signed in 1990 and Nunavut was created with the passing of the Nunavut Act in 1993. The agreement was a tripartite agreement; signed by the Tungavik Federation of Nunavut, the federal government of Canada and the territorial government of Northwest Territories. The transition from under the jurisdiction of the Northwest Territories was completed in 1999.(1)

As part of the Agreement, Inuit had to cede Aboriginal title to the land. Aboriginal title is legally recognized as the collective use and jurisdiction over ancestral lands. Key aspects of the Agreement include: ownership of 18% of the land in Nunavut, mineral rights for 2% of the land, 1.173 billion dollars, and the creation of a new territory with strong Inuit representation since 85% of the population in Nunavut is Inuit. Similar to the treaties, the Agreement protects the rights of Inuit to practice their traditional land-based activities.(2)

As well, being a federally recognized territory, Nunavut holds all the same territorial/provincial responsibilities in relation to health, education, environmental protection and economic development. Nunavut can levy taxes on its’ citizens, but only if the Inuit land is inside a municipality and has businesses, services or buildings present.(2) Individuals will also pay income tax on earnings, similar to other Indigenous groups who live and work outside of First Nations reserves.

The Tukisittiarniqsaujumaviit? is a plain language version of the Nunavut Land Agreement.

The connection to the land and its continuing importance to Inuit is showcased in a series of storytelling videos that you can view.

The other three regions of Inuit Nunangat have signed or are in negotiations for Comprehensive Land Agreements. For Nunavik, the Makivik Corporation is working within the James Bay and Northern Quebec Agreement (JBNQA).(3) The JBNQA was signed in 1978.

Inuvialuit is being represented by the Inuvialuit Regional Corporation and signed an agreement with the federal government and the Northwest Territory government to negotiate a comprehensive land claim including self-government in May 2007.(3)

Nunatsiavut has been self-governing since December 2005, when the Labrador Inuit Land Claims Agreement and the Labrador Inuit Constitution came into being.(4) The Agreement was not a tripartite agreement; the federal government was not a signatory. Included in the settlement area is 72,520 square kilometers in northern Labrador, as well as 48,690 square kilometers of sea; 15,800 square kilometers of the land is owned outright by the Nunatsiavut. The Nunatsiavut government, similar to Nunavut, has jurisdiction over education, health and cultural affairs. Nunatsiavut is still part of Newfoundland and Labrador, therefore Inuit have to pay provincial and federal taxes.(4) The Inuit Organizations and Land Claims website has more detailed information regarding the Nunatsiavut Land Claim.