Learning about theories of Whiteness and anti-oppressive education and practice is challenging but rewarding work. Ideally, it will alter one's perspective of self, one's students, and the classroom. This module will introduce concepts of anti-oppressive theories including allyship, with the intent to create self-awareness and to begin the process of building an anti-oppressive practice in your personal and professional life.

Anti-oppressive education is about developing critical consciousness (Friere, 1970). Critical consciousness focuses on achieving an in-depth understanding of social and political contradictions. In essence, it is an awakening process to the social, economic, cultural, educational and spiritual inequities and disparities caused by colonialism. As Paulo Friere (1970) states in Pedagogy of the Oppressed, critical consciousness is being able to "intervene in reality in order to change it."(1)

Anti-oppressive Practice will require you to:

The following video features Tim Wise, who is an anti-racism educator and the author of 7 books on racism in the United States. Although his discussion focuses primarily on the African American experience in the United States, some of this information is transferable to Canada and Indigenous peoples.

After watching the video ask yourself the following questions:

The path toward becoming an anti-oppressive educator and practitioner is not an easy one to follow. All human beings will revert to what is familiar. We all have a default mode — a place where we are comfortable and that place in our minds is our cultural comfort zone. Unfortunately, that comfort zone is a place of either oppressing others or being oppressed. As mentioned previously, anti-oppressive practice and decolonization is challenging work, personally and professionally, but it can also be rewarding.

Allyship has become the most common term to describe individuals that work alongside oppressed peoples or groups to fight against oppressive systems, and is typically a member of the dominant group such as a non-Indigenous person, a white person, a cis-gender person etc. Nicole Asong Nfonoyim-Hara, the Director of the Diversity Programs at Mayo Clinic, defines the act of allyship as "when a person of privilege works in solidarity and partnership with a marginalized group of people to help take down the systems that challenge that group's basic rights, equal access, and ability to thrive in our society."(2) To be a good ally involves many of the same characteristics outlined above on how to develop an anti-oppressive educational practice. But not everyone is going to become an educator, so what can you do on a personal level?

The following continuum developed by Karen Bradberry explains how one could evolve into an ally. 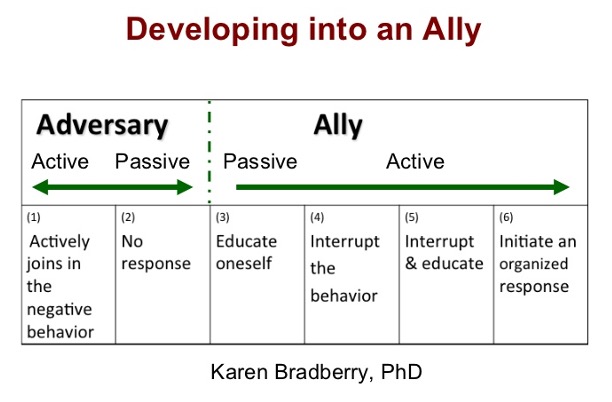 The British Columbia Teachers Federation presents the following information on how to be an ally(3).  Becoming an Ally and Practicing Allyship

As with many social justice movements, there are issues against using the term ally, some prefer accomplice. However, there are also many examples of self-proclaimed allies doing all the talking on behalf of the oppressed group. This is an example of what not to do. The following video takes a look at the industry of allyship.

This module presented a snapshot of Colonization, Colonialism, Decolonization, Anti-oppressive education and allyship. This is a beginning — a starting point for your journey in helping to change the society and world that we live in. Change begins with the self and from there you will "intervene in reality in order to change it."(1)

(3). British Columbia Teachers’ Federation. (2021). Becoming an ally and practicing allyship. Retrieved on July 29, 2021 from this weblink