Whiteness theory, which is similar to race theory, is a social construct that provides material and symbolic privilege to whites, such as better access to higher education, better employment opportunities, a choice of safe neighbourhoods to live in, as well as defining concepts of success, beauty and intelligence. Whiteness is normalized, taken for granted and thus invisible to those that are white.

The following video gives a good overview of how race as a social construct came about.

Whiteness theory does incorporate white privilege. White privilege is the societal and institutional benefits granted to individuals simply based on the color of their skin. Peggy MacIntosh, one of the most iconic pioneers on white privilege states, "I was taught to see racism only in individual acts of meanness, not in invisible systems conferring dominance on my group."(1) McIntosh created a list of how her white privilege benefits her in her article White Privilege: Unpacking the Invisible Knapsack.

This quizlet gives a brief overview of McIntosh’s work.

The following video gives good examples of white privilege from an individual perspective. Understanding that you have white privilege can be challenging if you came from a place of poverty or where you felt you had to fight to get ahead.

If you're interested, you should be able to see the other 4 videos through the YouTube suggestions that pop up at the end.

The other concept related to many settler mindsets is that of meritocracy. Meritocracy, as defined by the Oxford dictionary is the holding of power by people selected on the basis of their ability. Sheelah McLean, an anti-racist educator in Saskatchewan, describes the myth of meritocracy in relation to white settler colonialism and how settlers became successful because they worked hard in this short article.

Dr. Robin DiAngelo is also becoming well known with her books and videos on racism and white fragility and she does a superb job of deconstructing white privilege in the following video.

Try the following quiz to see how privileged you are.

Are You Privileged Quiz

Disclaimer: this is not intended to be a scientifically based quiz but more of a learning opportunity. As you can tell this quiz delves into other areas of privilege not discussed here, such as gender and sexual orientation.

Power and privilege and colonialism are part and parcel of the same social construct. Through the process of colonization, the colonizer asserts dominance and control over the Indigenous peoples of a country; often through force (Red River and Northwest Resistance) or through treaties and by becoming the population majority. Colonialism continues to assert dominance through governmental policies (Indian Act) and other institutions (colonizer version of history being taught to everyone in schools). Historically, the ruling class has all the power in any society and in the contemporary context, the 'ruling class' is white and male.

Michael Welp talks about 3 things that white males don’t know when it comes to power and privilege in the following video:

Power, in its most basic definition is the ability to act or have influence over others. We can often feel powerless to create change at an individual level. Or we may not recognize the power we do have. In the following video Eric Liu, an educator of civics, describes how to understand power and why it is important that you become involved in civics.

The Oxford Dictionary defines cultural appropriation as: the unacknowledged or inappropriate adoption of customs, practices, ideas etc. of one people or society by members of another and typically more dominant people or society. There are blatant examples of cultural appropriation, such as young non-Indigenous women wearing Indigenous headdresses/warbonnets as in the picture below. 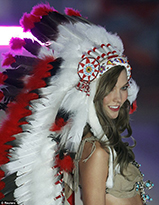 However, the more subtle nuances of cultural appropriation is when members of the dominant society feel they have the right to teach about, write about, emulate practices or art forms because they feel they are honouring the culture and the people, in essence playing out the adage 'imitation is the sincerest form of flattery'.

Read the following blog that looks into cultural appropriation from a spiritual context.

Appropriation comes in many forms, not just clothing or foods. How do you prevent cultural appropriation? The inverse of appropriation is appreciation, and that comes from educating yourself and knowing the difference. The following articles gives good overviews of both appropriation and appreciation.

There’s a Big Difference Between Cultural Appreciation and Appropriation — Here’s Why It Matters - Healthline.com